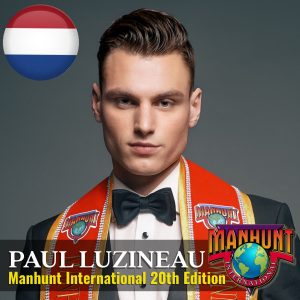 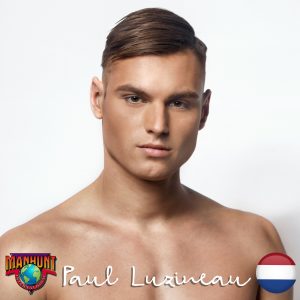 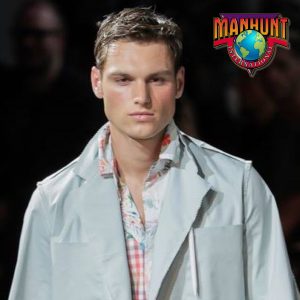 PAUL LUZUNEAU, a 23-year fashion model, is the winner of the 20th Edition of Manhunt International . He stands 1.90 meters tall. He lives in a town in Emmen, Netherlands and studied at Cios Goes Breda and too up Sports Academics. After 3 years, he enrolled in MBO Utrecht Sport en Bewegen.

The 20th Edition of Manhunt International was held in New Frontier Theatre, Araneta City Cubao in Quezon City, Philippines. Paul received the Face of the Year award and bested 35 other Manhunt contestants

It was his interest in physical fitness that gave him his perfect physique, which added to good looks and determination helped him emerge as the winner of Manhunt Netherlands and the 20th Edition Manhunt International World Final

"What I want to achieve is to show that if you work very hard at something, you can do it! I think that true beauty is inside, so if you reflect your inner beauty, you live with more confidence. And I hope to bring that over to the youth," Paul said.

Paul works as a personal trainer in a local gym to help people get back on track while being healthy and fit. He is also a keen soccer player and gives his time to train the children at his soccer club. His dream is to become a full-time fashion model so he can be a role model for young people. Paul wants to inspire the next generation and wants to encourage them to follow their dreams.

His secrets of success are: (1) always be yourself, (2) treat other people on how you want to be treated and (3) stay healthy physically, emotional, mentally, and spiritually.