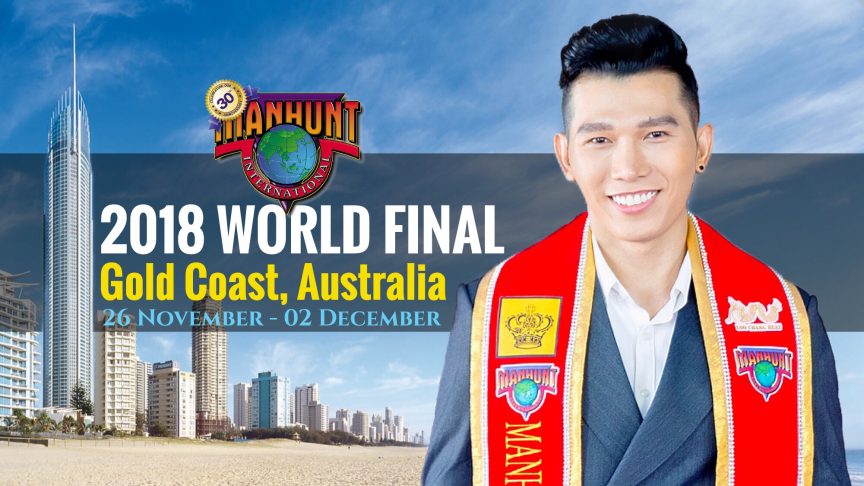 The Manhunt International World Final host country was recently announced to be held in Vietnam in March 2019. It has now become apparent over the past three months that the application process for the government permit is going to take much longer than we had been advised, and there is a very strong chance the scheduled time frame of March 2019 might not be possible. With this in mind and to make sure our National Directors and Supporters are not disadvantaged we have made the following important decisions:

The 2018 World Final will now be held on the fabulous Gold Coast, Australia from Monday 26th November to Sunday 2nd December.

The first ever Manhunt International World Final was held in 1993 in Gold Coast and it’s fitting that 25 years later it returns to the place where it was born.

The official hotel is already confirmed and will be the magnificent Q1 Resort & Spa – Gold Coast. Special accommodation rates are available to family and friends if they visit q1.com.au and enter the discount booking code MAN18. All other events are being planned and the itinerary will be finalized in September. Expect to see Australian favorites including Kangaroos, Surfing, BBQ and Beach activities.

It’s very rare that any pageant can plan for two years, but by making this change everyone can forward plan with confidence for the 2019 Manhunt International World Final. The change and rescheduling means that the 2019 World Final will now be held in Ho Chi Minh City, Vietnam in November 2019.

This is the first time in the history of Manhunt International, and possibly all other Male and Female Competitions, that two World Final dates and host countries have been announced together.

The World Final Details Are: